A few months ago, Greg got an email with a special for our favorite lodge in Sequoia National Park… but he didn’t see it until around 11:45pm on the night of its expiration. He ran upstairs and asked me, “Quick! Do you want to go to Sequoia again? How about in February so we get snow?”

And we did. It was the fastest vacation planning on earth. We clicked the “purchase” button at 11:59pm. 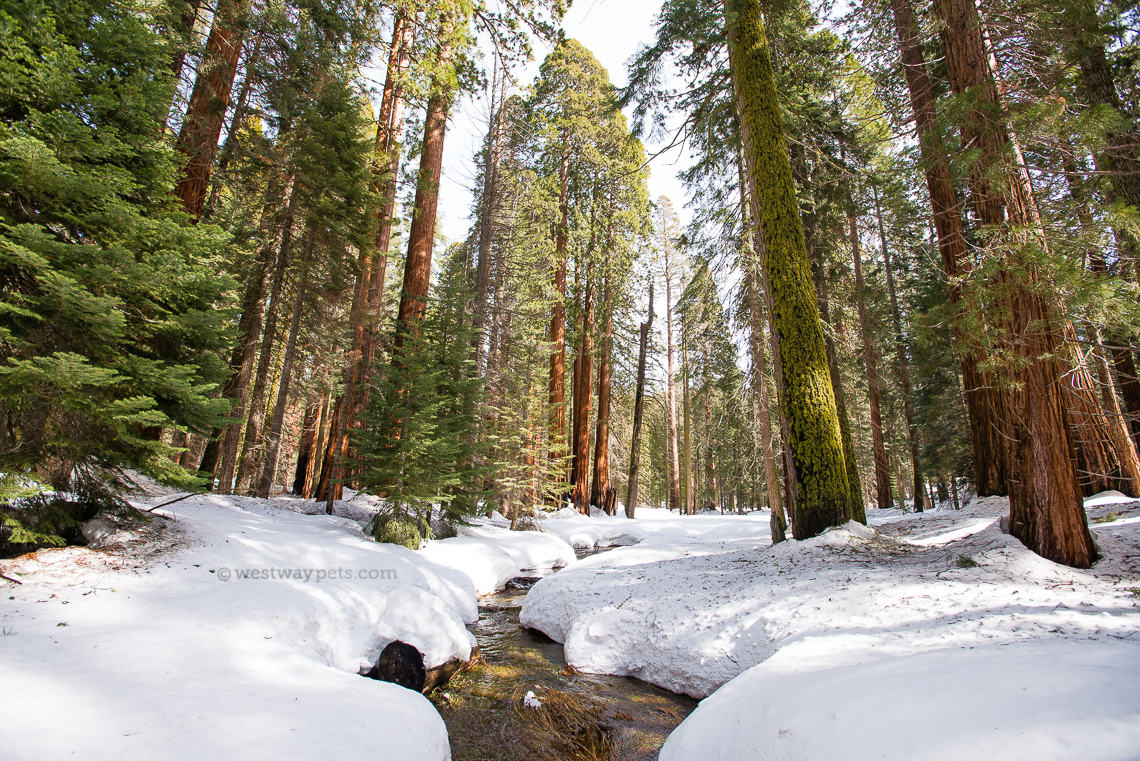 To prepare for our trip, we rented snowshoes from REI; bought a ridiculous amount of soups, sandwich fixins, snacks, and trail mix goodies from Trader Joe’s; and packed all of our cold-weather gear, including snow chains for the truck (just in case), snow boots, snow pants, and my entire wardrobe of Cuddl Duds. As a side note, ladies, Cuddl Duds are ridiculously warm… and I am the coldest person on earth.

We drove up to Wuksachi Lodge on a Sunday. We stopped near the Giant Forest museum on our way so I could hug some redwoods. They are my favorite and I couldn’t wait to say hello! I’m in both of the photos below — can you spot me? 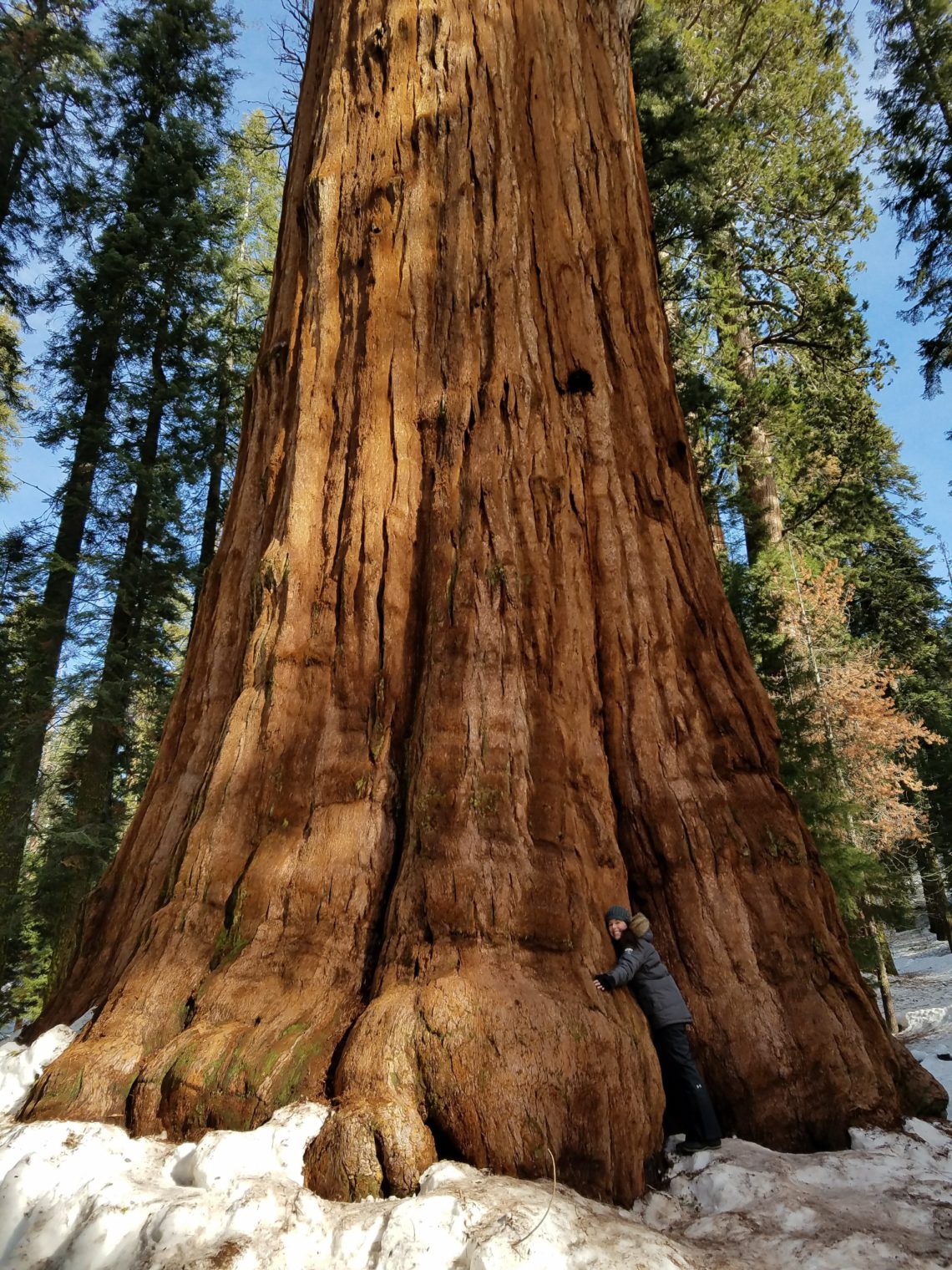 The following day, we set out on the Congress Trail around the General Sherman Tree in the Giant Forest. 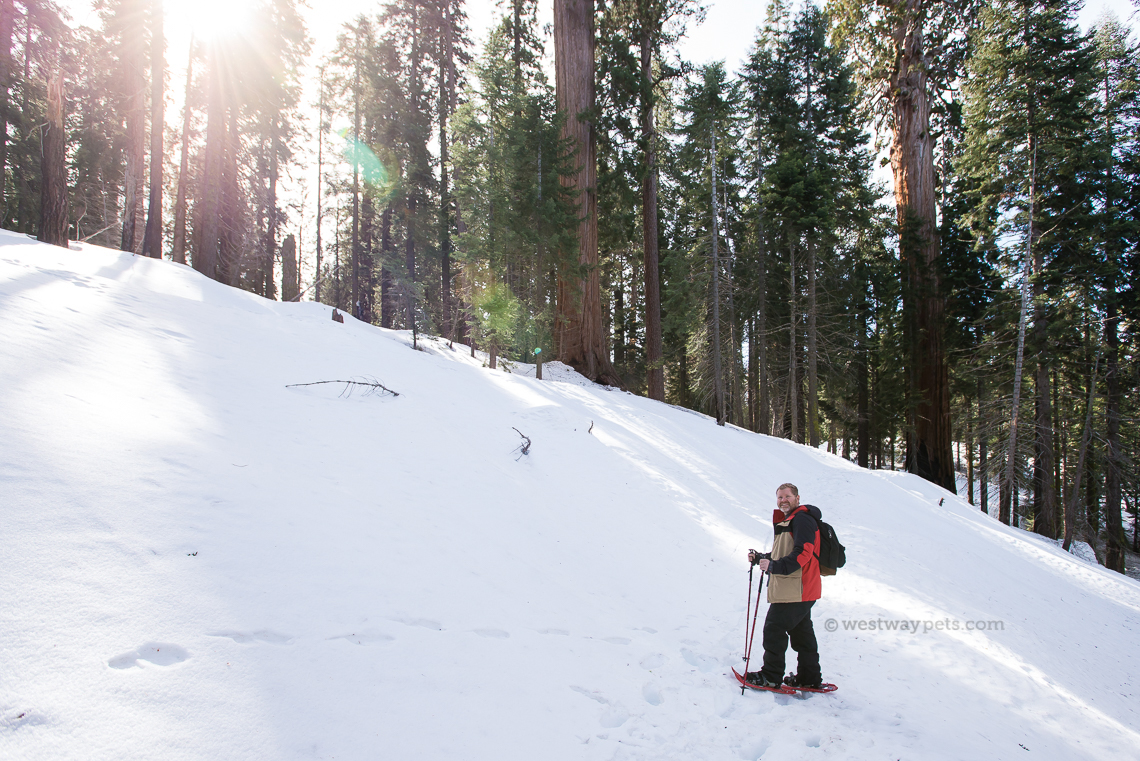 We saw two people in the parking lot as we were coming in and one person walking around the General Sherman tree as we made our way to the trail. The area was so quiet and peaceful; a far cry from all the screaming children during autumn. 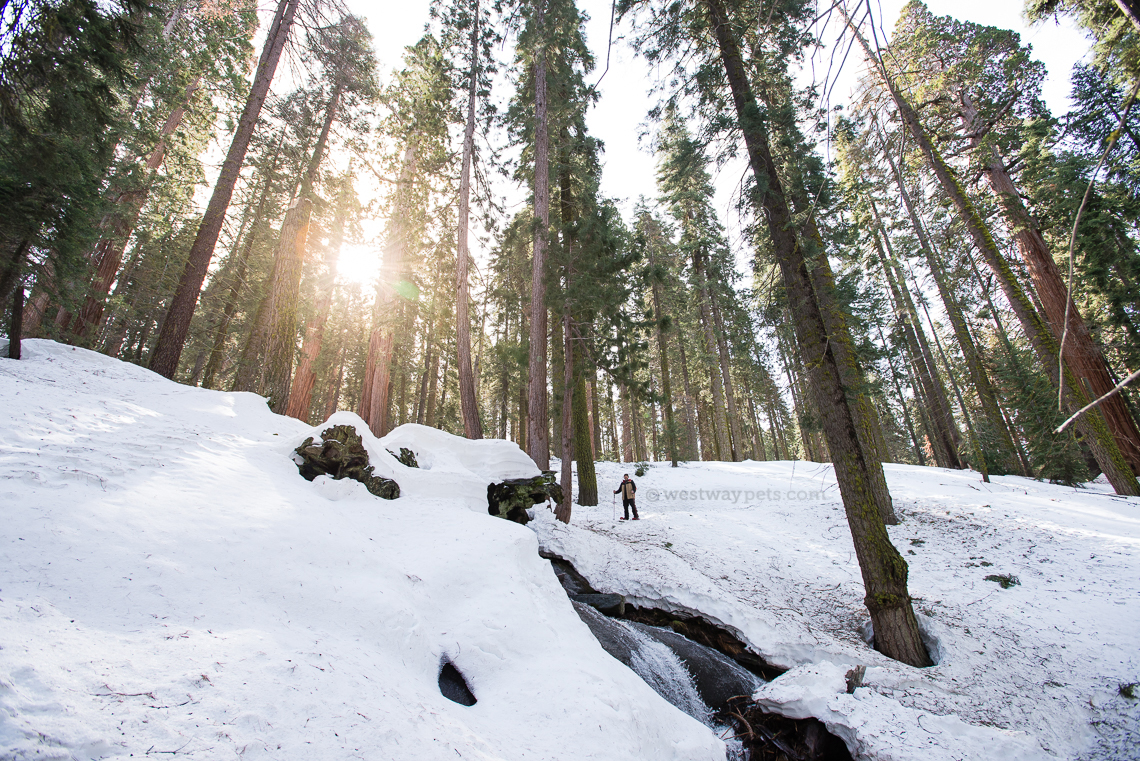 Since the trails were covered in about eight feet of snow, we had to look closely for where others had traveled to find the trail markers on the trees. Not far into our adventure, we had to make four water crossings. The first was over a bridge — easy. The second, we had to climb down into the creek, cross, and climb back up — not too easy but it’s where the trail was, the creek was just overflowing the asphalt crossing. The third was pretty easy but similar to the second. The fourth was the most fun, for sure — we had to duck under a giant tree!

At every crossing, we knew it was just one more deterrent for casual hikers and we smiled. We were practically on our own all day except way down the trail, we briefly saw two other hiking couples… we said hello and each went on our way… something tells me they each appreciated the solitude as much as we did. Greg is in both of the photos above. The one on the right is a bit like Where’s Waldo! We came across gurgling streams and small, beautifully sunlit openings between the trees. The texture on the trees is unlike anything I’ve ever seen. The bark was actually a bit squishy! When we came across this beautiful little creek, we knew this was our spot for lunch. We sat on the snow-covered ground in a patch of sun and ate peanut butter sandwiches, Trader Joe’s popcorn, and trail mix. It was one of the best and most memorable lunches of my life. Just a few steps from our lunch spot was the Cattle Cabin. It was practically buried in the snow! After lunch, we hiked up the Alta trail to see some of the other named trees. By now, it was getting later in the afternoon and we knew we’d want to start heading back. Since the trail doesn’t loop back to where we needed to go, we had the choice of backtracking or forge a trail back. Now, if it had been any other time of year, I would have said backtrack but it was winter and the ground was covered in many, many feet of snow; we weren’t going to harm the landscape. So, we put fresh tracks in the snow as we made our way back to the car. As we crossed each creek on the way back, we realized we were getting closer and closer to civilization. We came across a few groups of people who were just out for brief expeditions. It made us even more grateful for our quiet day out in nature, just the two of us. It was definitely one of the greatest days I’ve ever had. On our second day, we decided to check out the Lakes Trail at Wolverton. This was a tough trail with a lot of elevation gain. There were no redwoods on this trail but it was an absolutely stunning pine forest. The sun warmed us as we made our way up, up, up to where the trail split to the Panther Trail. We saw there were a few creek crossings on the Panther Trail — and I love creeks! — so we went that way. We found a good crossing, sat down like the day before, and enjoyed another lunch of peanut butter sandwiches, popcorn, and trail mix.

We only saw one other person on the trail the entire day. I was so, so happy! It was a quick trip but it was just what we needed. The next time we go, I think we’ll skip the Lakes Trail and try the trail up the canyon by Lodgepole. We’ll definitely do the Giant Forest trail again, though — that one is definitely a favorite of ours!

You might also be asking yourself, um, where is Roxy? If you didn’t know, National Parks are notoriously difficult to enjoy with your canine companions. My guess is that there are probably too many bad dog owners who wouldn’t clean up after their dogs or who would let them chase the wildlife, so it’s easier to just have a blanket “no dogs allowed” policy. Well, except on paved trails; dogs are allowed there. We did actually see quite a few dogs in and around the lodge, so they’re welcome to be there but you can’t leave them in the room alone or bring them out on the trails, so I’m not really sure what you’d do all day. It just doesn’t seem fun for anyone. So, Roxy stayed home to get loved and pampered by her grandmama!

Roxy is ready for some Thanksgiving turkey! 🦃 W

When we took off in May for this big journey, I wa

It's hard to believe that we've been traveling for

We are rollin' in to town today, peeps! We're goin

Howdy, friends! It's been a minute since I popped

It seems like just yesterday I was announcing our

Kisses from mom are the very best! Sweet Mason pas