Confessional: The Art of Getting Messy on a Commercial Photo Shoot

Here’s a big secret about great commercial pet photography: mess is where the magic happens.

I have to admit, I secretly (or not-so-secretly?) LOVE IT when clients tell me they want to connect with the mountain adventurers, the beachgoers, the hikers — you know, the pup parents whose dogs always seem to come home covered in dirt and mud. Whether it’s me getting messy or the dogs themselves, the best shoots happen when everyone goes home from a shoot soaking wet or covered in dirt — or both! It means we didn’t hold anything back and just went for it!

Not convinced yet? Here are five of my messiest commercial shoots where the magic came together… 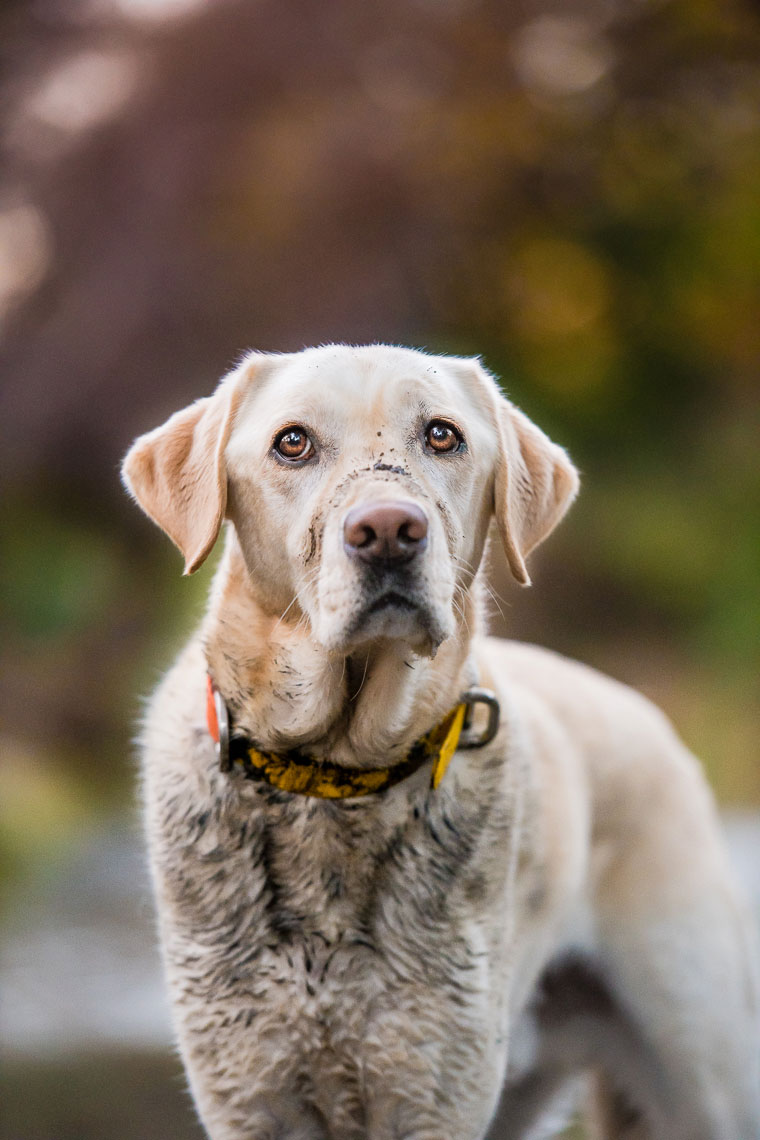 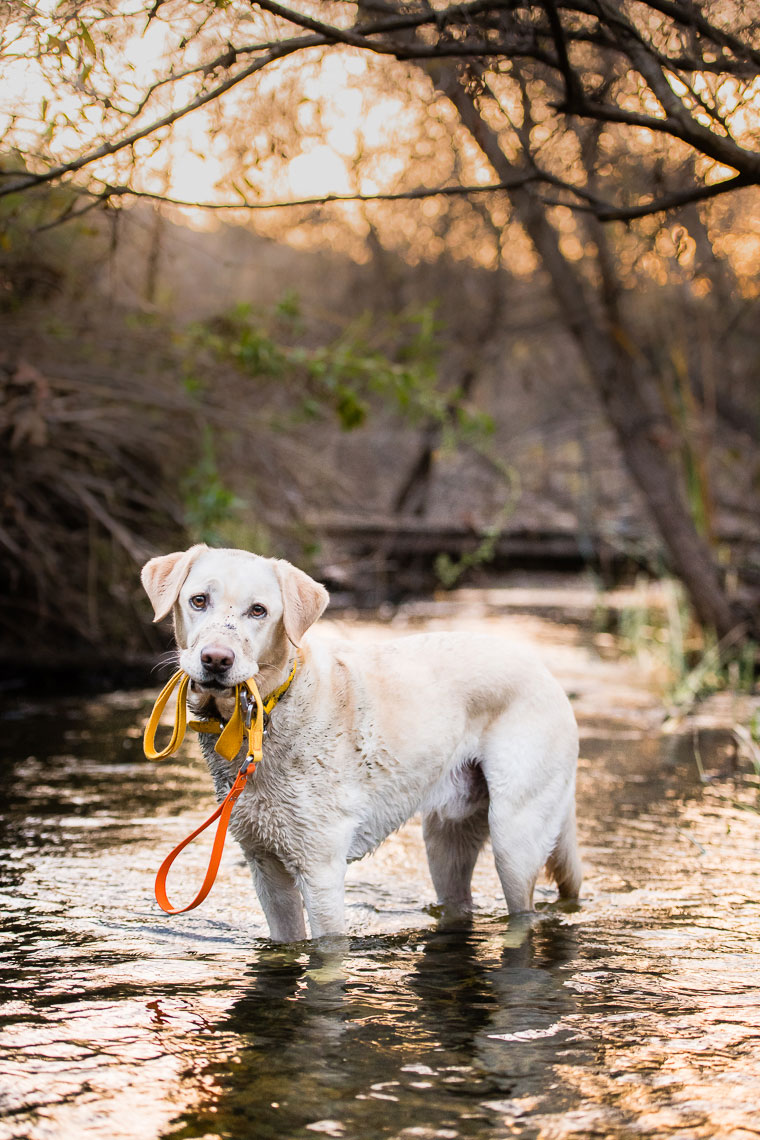 What happens if you need a dirty dog but your model is such an amazingly well-behaved good boy who would never even dream of getting dirty? Let me introduce you to Mike.

A former service dog, Mike is impeccably well-trained. His mom knew before the West Paw photo shoot that we were planning to get him dirty — but poor Mike didn’t. It took him a while to catch on that a bit of dirty fun was the intent.

When the time came, we took Mike beside the creek, grabbed handfuls of mud, and rubbed it all over him. The initial look on his face was utterly priceless! “I’m a good boy, mom! I don’t know what is happening! I didn’t do it, mom!”

Then “service dog” Mike caught on that this was his job tonight — and he began to really get into it since he loves to work! Mike gave a new look with every shot and posed perfectly, showing off his training skills even under the muckiest conditions.

Good-boy Mike’s dirty adventure went on to give us the cover shot and some full-page photos for West Paw’s new product catalog. Now that’s a very good boy! 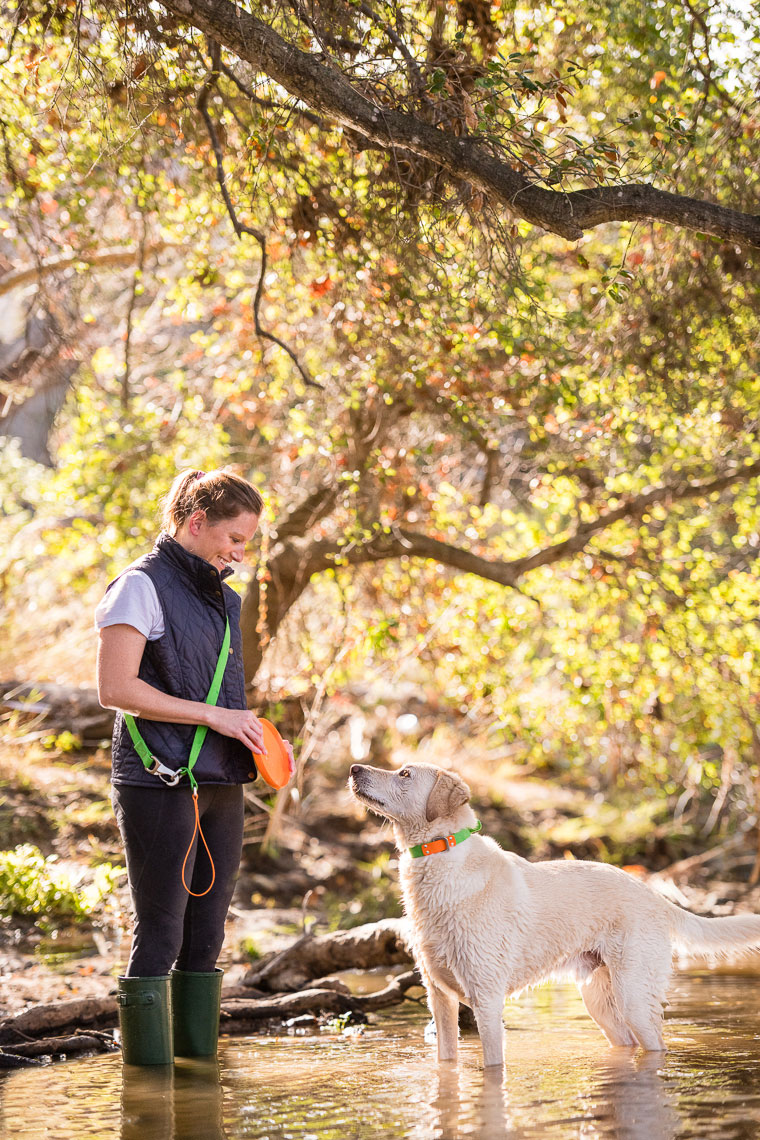 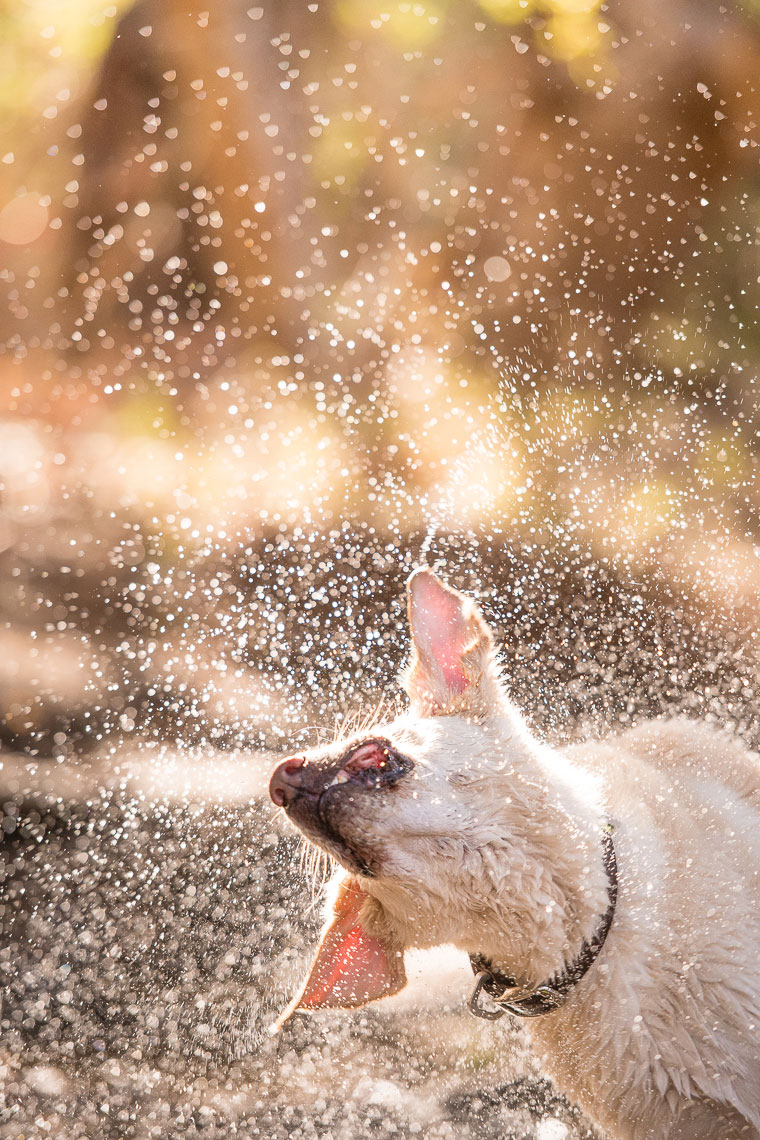 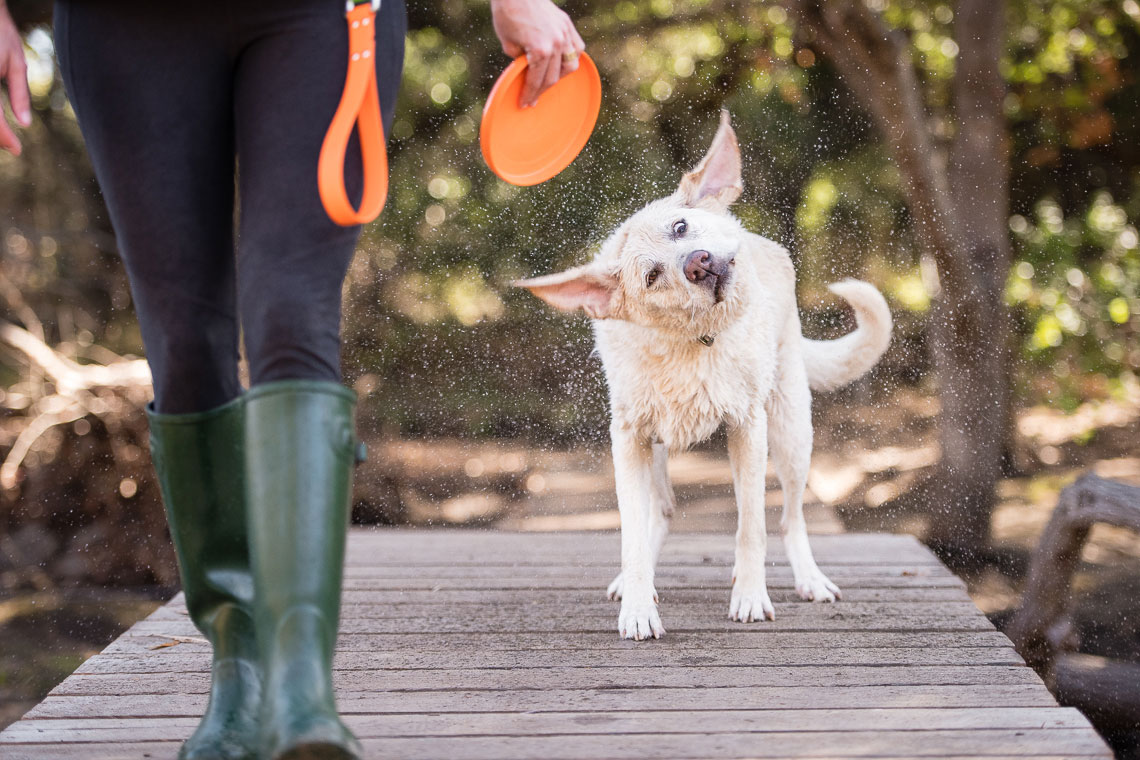 2. Maybe A Wetsuit Next Time?

When I shoot, I’m more focused on my subject than myself and my water-filled adventure with Jack for West Paw is one of my favorite examples of how focused that can be.

We wanted to show off the durability of some new West Paw collars, leashes, and toys in the water. Jack the yellow lab loves getting wet so we brought him down to a creek for some good ‘ol fashioned fun! I came prepared with tall wellies but probably should have worn waterproof overalls.

It wasn’t long before Jack got soaking wet playing with the toys — and so did I.

At one point, I was getting lower and lower and lower, trying to get as close to the surface of the water as possible, until I plunked right in. Once I was wet, I just embraced it. It’s just water, after all!

Jack and I were both soaked by the end of the shoot but the photos were totally worth it.

Thankfully, Jack’s mom and I both had the foresight to have some extra towels waiting in our cars. 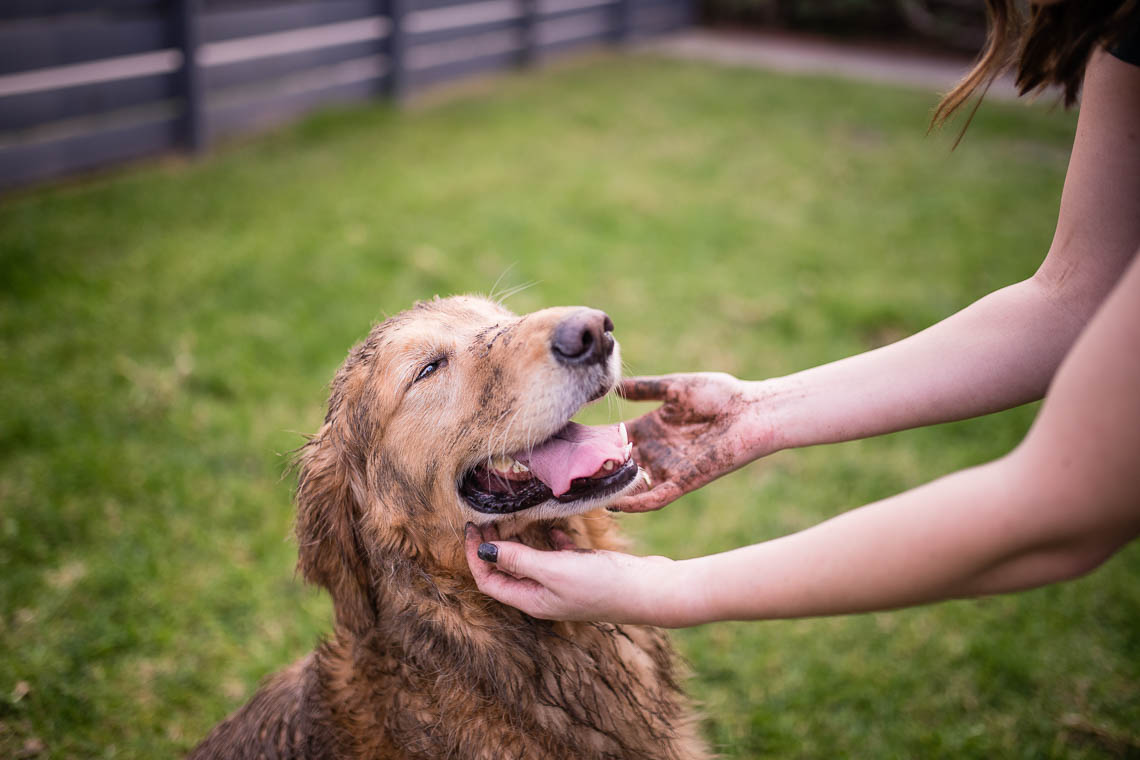 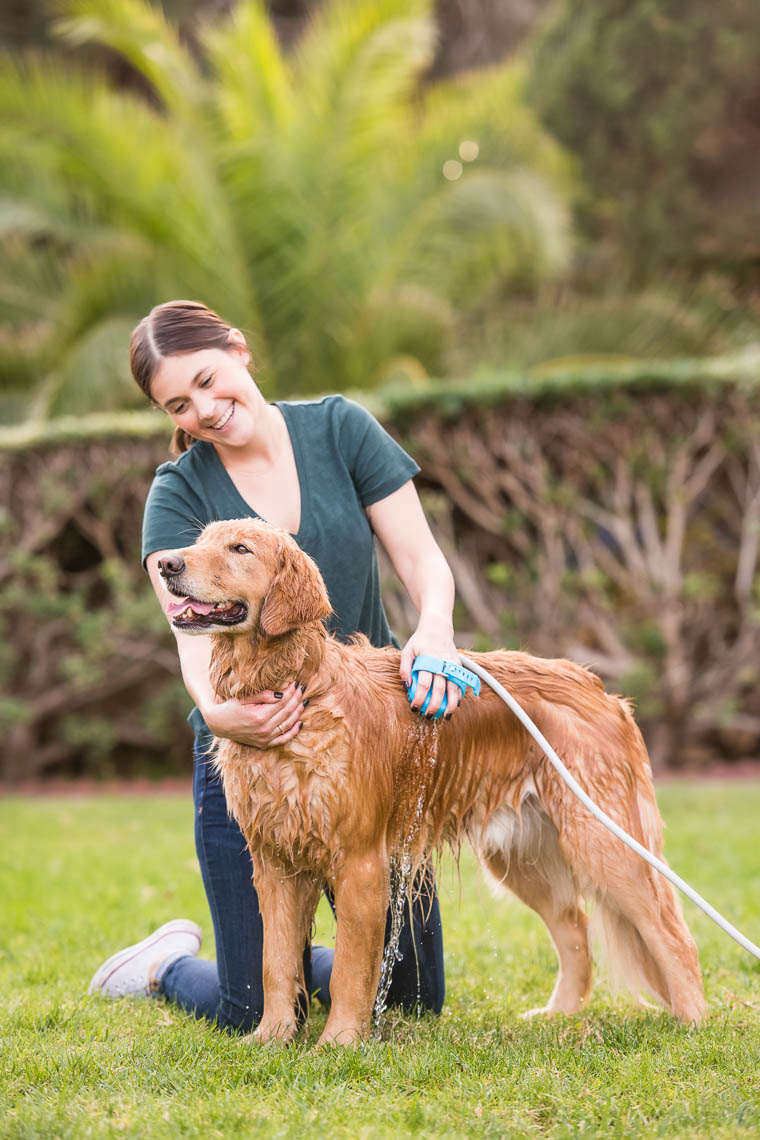 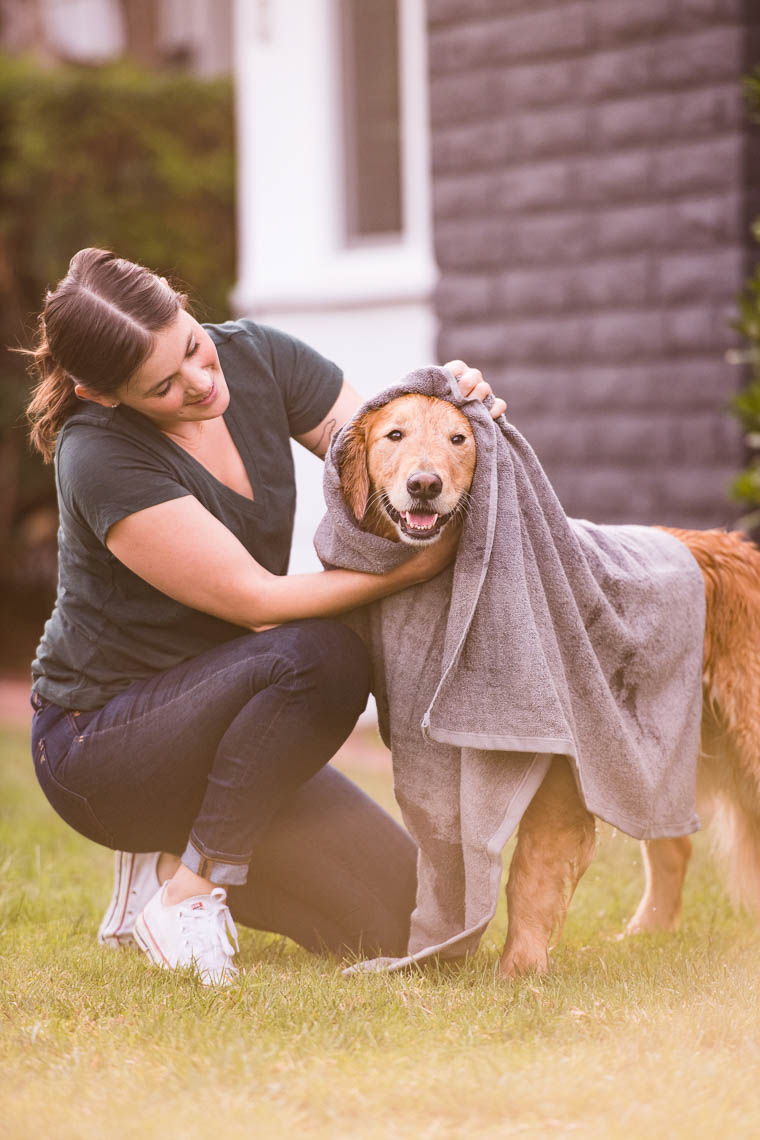 But what if you need a dirty dog somewhere that isn’t, well, dirty? That’s exactly what happened at our Aquapaw photo shoot. Aquapaw is a dog bathing tool so we needed to start out with a very dirty dog.

We were at a home where there wasn’t a creek, beach, or puddle to be found. So what did we do? We brought our own mud! Lots and lots of mud. Just like Mike, we had to cover Moby in it. Unlike Mike, though, Moby had no qualms about going with it! He was so proud of his newfound dirt and we all had a great laugh as his mom playfully threw her hands up and shrieked, “MOBY! WHAT DID YOU DO???”

He bounced happily, ran some zoomies, then gave a good shake to share some of his wonderful muck with us.

We ended up with the most ridiculously adorable photos that tell a story of something we’ve all encountered at least once — a very happy and very dirty dog who desperately needs a bath before stepping one foot inside the house! 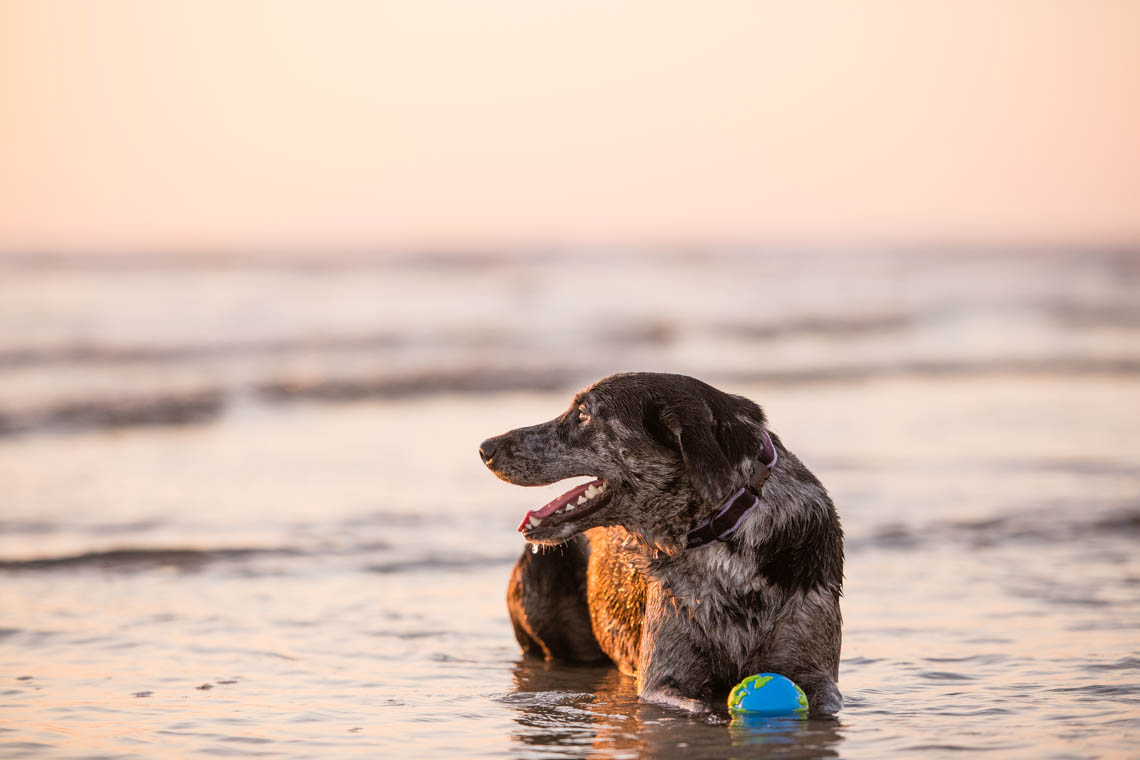 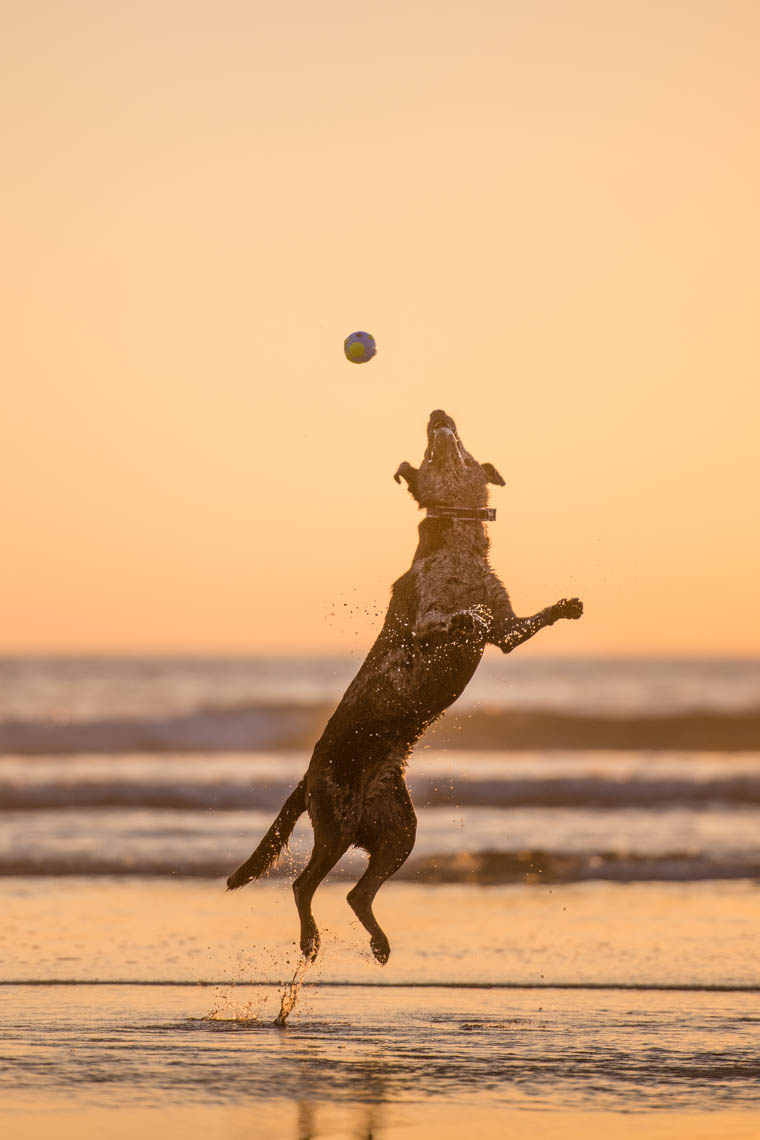 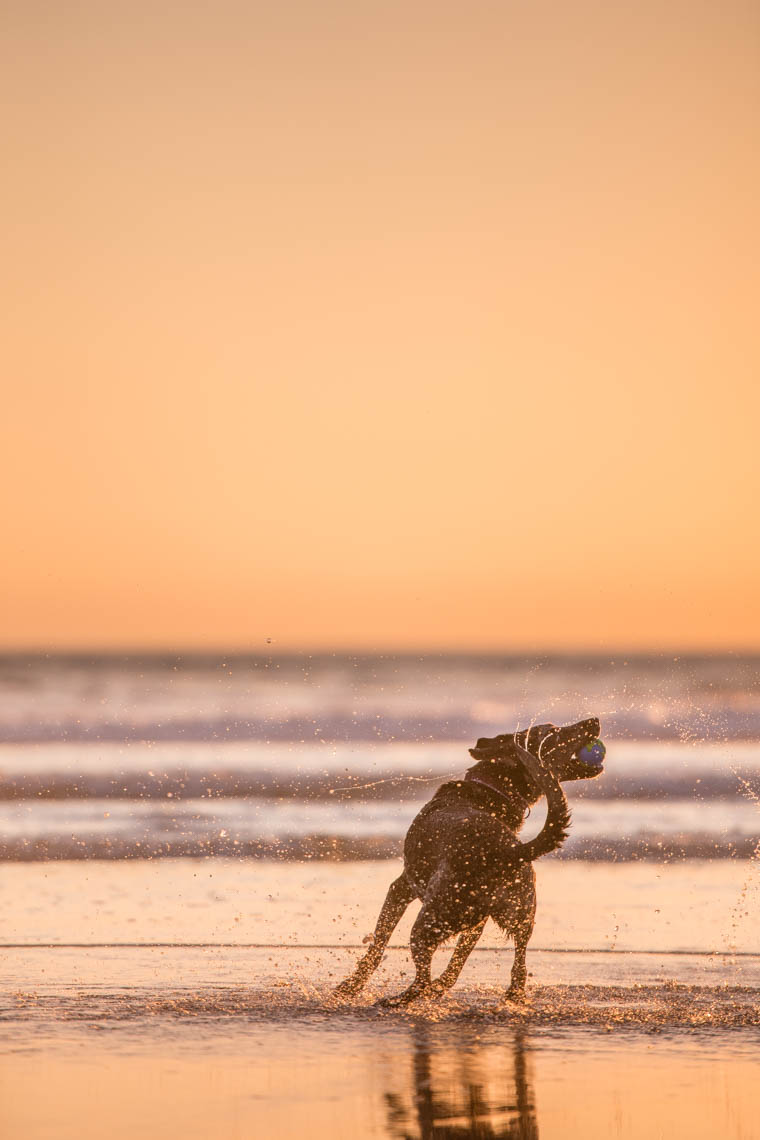 When Moose came to model for a Planet Dog shoot at the beach, I knew we were all going to get messy. There’s simply no way to stay clean at the beach. Plus, we’d planned for a day with a super-low tide, so I knew I’d be spending lots of time in the highly-reflective, still-wet sand and shallow water.

Moose loves to run and splash in the waves and I was trying to capture her from every angle.

I had been staying high enough on the beach that the waves weren’t hitting me but you know Mother Nature never likes when you start to feel too comfortable! I was down low, with the ocean behind me, and suddenly felt a rush of cold water hit my feet… legs… stomach… elbows… it happened so fast that I didn’t have enough time to get up but I did have the quick reflex to lift my camera high above my head to keep the water from reaching it. Others may tell you I even screamed “save the camera!” as the water engulfed me.

I was completely soaked but the camera was safe!

We continued on and got some beautiful, beautiful photos that evening. 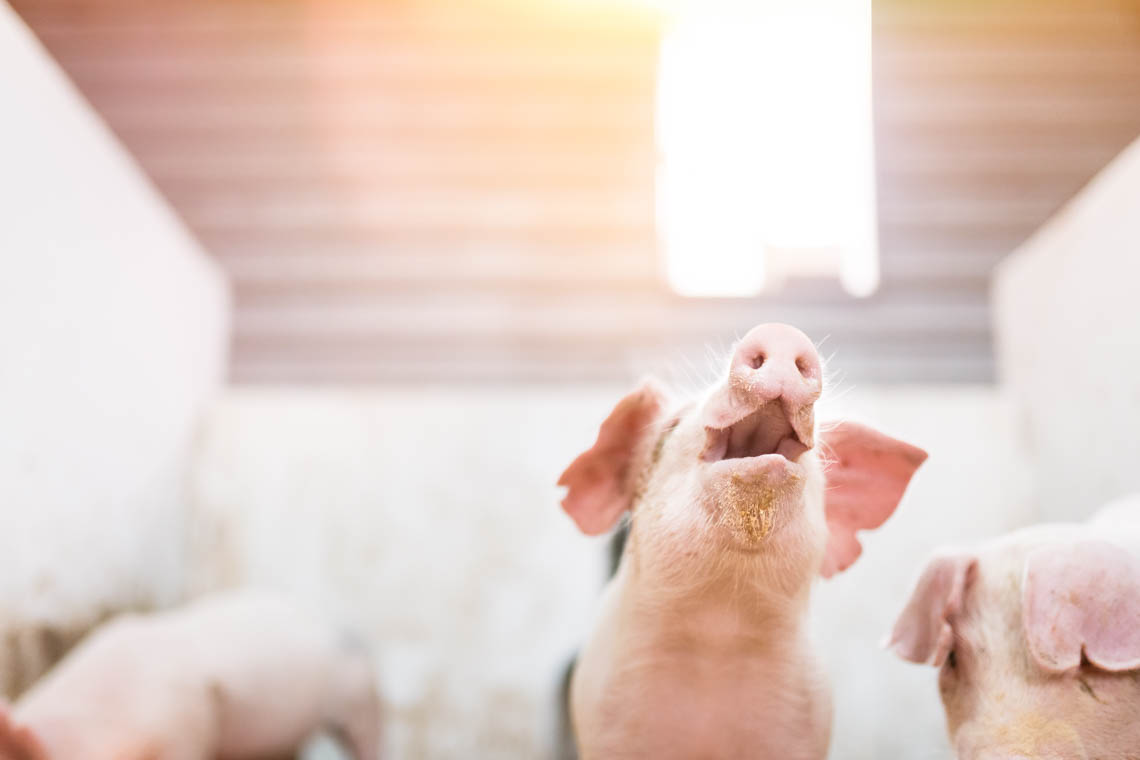 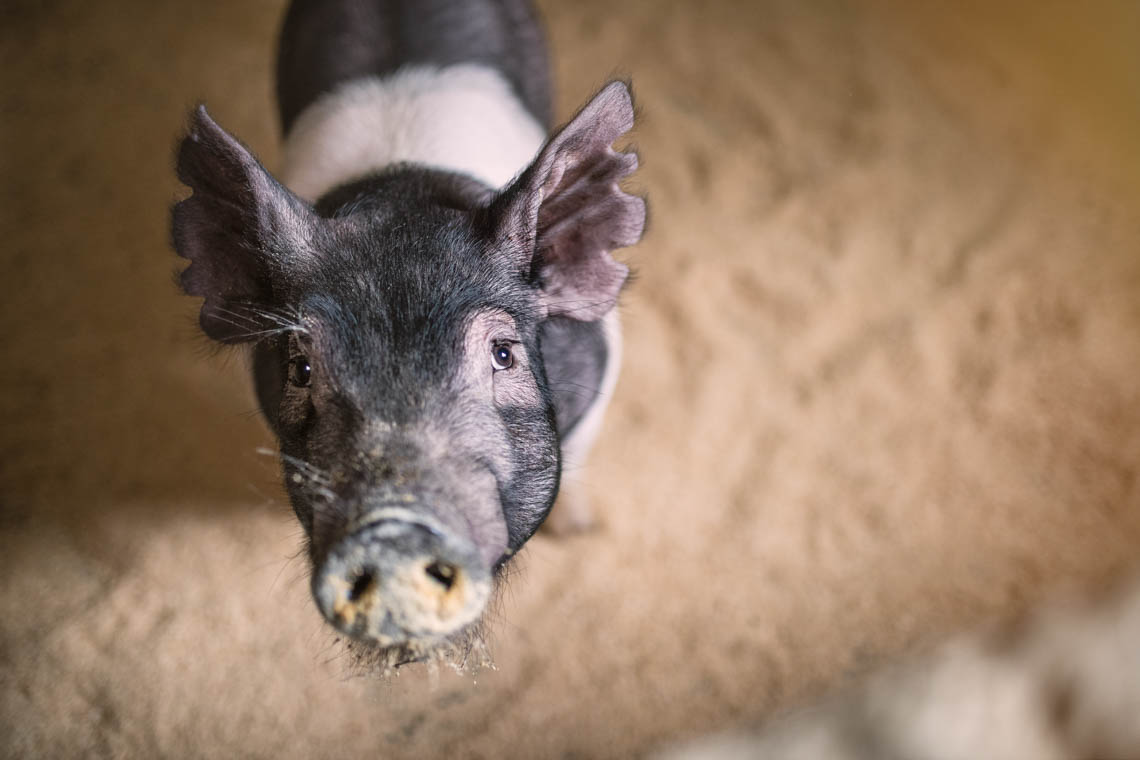 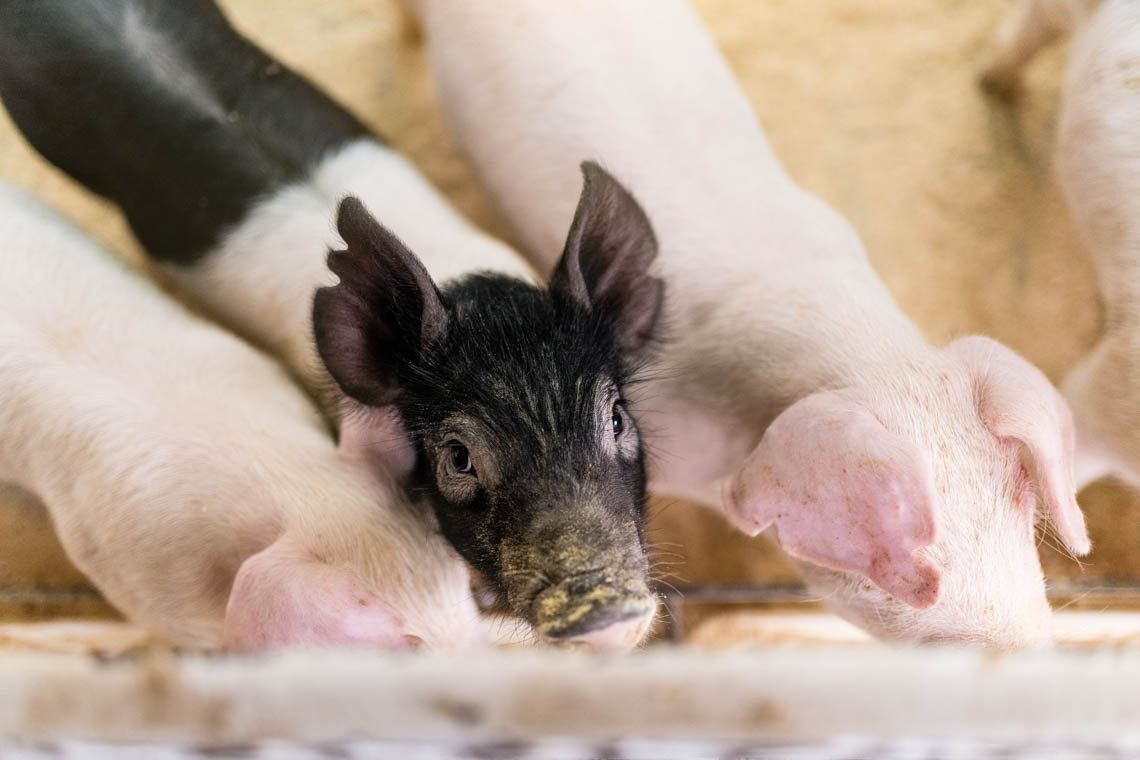 I think the ultimate getting-dirty photo shoot was when I was working with adorable baby pigs to create new brand imagery for Emmert. We were at one of their customers’ farms and it was my job to capture the animals in their stalls.

Pigs’ pens aren’t huge, so I was squished into the wall trying to give myself as much room to work with as possible. After a few minutes, my assistant calmly asked, “do you realize where your head is?”

Of course, I really hadn’t, but then I did. I was pressed right up against the wall of the pen, which was covered with stinky… um… muck. Oh, well! That’s what showers are for, right? I shrugged, continued on — because, hellooooo, adorable pigs! — and got the winning shots!

OK, now that you’ve had a chuckle imagining that last one, is there any doubt in your mind that sometimes commercial animal photography has to get dirty? When you’re considering your next shoot, make sure to recruit a photographer who not only is ok with this, but revels in it like I do. Of course, you could always just hire me!

Home » Confessional: The Art of Getting Messy on a Commercial Photo Shoot